The Pendle Witches–Returning from the past

November 14 2011.  This was the first day that I heard of the Pendle Witches, specifically Alice Nutter.  Alice was charged with witchcraft in 1612 in the Lancaster Witch Trials and was later hanged.  The village of Blacko was the site of where Alice was seen at Malkin Tower, also known as Stansfield Tower and Blacko Tower, with what was deemed a witch’s coven.
Now a memorial statue to Alice Nutter has been commissioned to mark the 400th anniversary of the trials.  It will be placed in the village of Blacko.
Statue plan to celebrate ‘Pendle Witch’ Alice - Peek Into The Past - Pendle Today
The next day I found more information on the Pendle Witches and the planned statue from the BBC.
Statue of Pendle Witch Alice Nutter to be commissioned
I was very intrigued by this news that after 400 years, what happened to these victims of fear and confusion will now be memorialized.  It shows that people are finally realizing how wrong the trials were.
What happened next is kind of eerie if you think about it.
December 8th, 2011.  The BBC reports - 'Witch's cottage' unearthed near Pendle Hill, Lancashire.
The story even hopped the pond and was reported by Fox News -
Centuries-Old Witches' Cottage and Mummified Cat Unearthed in Britain
Read more: http://www.foxnews.com/scitech/2011/12/08/centuries-old-witches-cottage-and-mummified-cat-unearthed-in-britain/#ixzz1gF2LuBFg
You have to admit that it is quite interesting that only a month after the planned memorial was announce that this ‘cottage’ was unearthed.  Add the fact that within a wall of the building the mummified remains of a cat were found and it is hard to dismiss the claims that it belonged to one of the witches of Pendle.  Admittedly there isn’t any ‘concrete’ evidence that a Pendle Witch resided within the walls of the well preserved building.  This hasn’t stifled the talk and the supposition among the locals and witches from around the globe.
Is there some supernatural link between these two events?  Are the spirits of Alice Nutter and the 10 other villagers, who were executed for witchcraft, now setting out to uncover more history of their lives?  What will be found next?
Next year will be the 400th anniversary of the Lancaster Witch Trials, which were held on the 18th and 19th of August, 1612.
This is an image of the original title page from The Wonderfull Discoverie of Witches in the Countie of Lancaster

The trial not only accused the women of Pendle but also other people, men and woman, from around the area of witchcraft.
It is nice to see that this information is now becoming mainstream and not relegated to the tabloids alongside who had the newest alien baby or the new date for the end of the world.
I am going to keep a watchful eye out for the next installment of the Return of the Pendle Witches.
Blessed Be.
Posted by Michael at 9:19 AM
Labels: Alice Nutter, Blacko, Lancaster Witch Trials, Malkin Tower, Pendle Witches 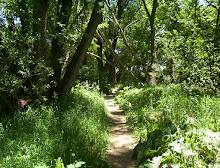